The Grand Rank system, that is the ‘national’ awards granted to masons in England, remains unique. At the Union in 1813, the right of nomination of all Grand Officers was vested in the Grand Master. Grand Officers are still appointed annually and invested by the Grand Master or his representative at an Annual Festival in April. The award of ‘past rank’ was an English innovation, initially very sparingly awarding grand honours and yet not requiring the holder to have previously held active office. It allowed the recognition of long and faithful services to the Craft by many who could not be accommodated within the limited number of available active Grand Ranks. Today, though tensions are raised at times, the processes of recommendation and selection continue annually, having been tried and tested and operated relatively impartially, over the years. 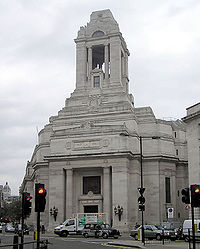 In 1908 the Honourable Fraternity of Ancient Masonry under the guidance of the Rev Dr William Cobb (1857-1941) seceded, soon changing its name to the Order of Women Freemasons which, as the name suggests, was restricted to women alone. The current Immidiate Past Grand Master, MW Bro Brenda Fleming-Taylor, presided at the centenary celebrations of the Order in London in June 2008 at the Royal Albert Hall. There were no less than 4000 Brethren of the Order present. The present Grand Master, elected 16th October 2010, is MW Bro Zuzanka Penn. Another breakaway group, also restricted to women alone, was named The Honourable Fraternity of Ancient Freemasons and consecrated in 1913. The first Grand Master was Mrs Elizabeth Boswell-Reid who held the office until 1933 and was succeeded by her daughter Mrs Lily Seton Challen. The present Grand Master is MW Bro Sheila Norden. The continued charitable contributions of these feminine orders are admirable and impressive.